We launched HiHello publicly a week ago on Saturday, August 18th at 3:00 PM PT. We’ve been delighted to see the level of engagement users have had with us. 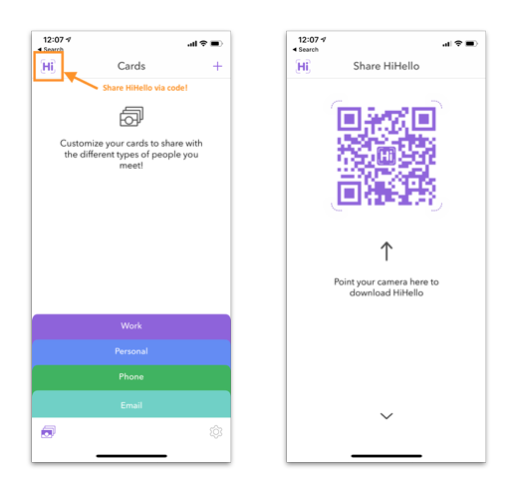 We launched HiHello publicly a week ago on Saturday, August 18th at 3:00 PM PT. We’ve been delighted to see the level of engagement users have had with us. Thousands of people have downloaded the app, tried it, and given us feedback. We value every single bit of feedback and the whole team has been reading your comments, suggestions, complaints, criticisms, compliments, and more!

As a startup with a small team, our goal was to launch quickly so that we can start to get user feedback, test engagement/usage, and quickly get into a mode of iterative development. As I tweeted recently, user feedback is like sunlight. It is illuminating. We’re SO excited to see that users are asking for so many of the features we have on our roadmap. Now we just have to build and deliver them.

We’ve been furiously working to put out bug fixes and new features based on the feedback we’ve received. As of today, exactly one week later we have pushed multiple app updates to both the iOS and Android stores to fix critical issues, and make your experience better.

Here is a quick summary of what we’ve addressed:

Signup problems in iOS: We were hoping to pull off a password-less signup flow for HiHello. We decided to use an email verification via a “magic link” that takes you back to the app via a deep link. This worked reasonably well in our tests. However, when we launched we found that about 20–25% of users on iOS were having trouble with signing up. Clicking the link would not take them back to the app as it was supposed to. Here is what that felt like: 😬🙄😱😰🤯!

After investigating further including a few late nights our conclusion is that this is an open issue on iOS that we have no control over. The only fix was to move away from the magic link approach.

We’ve scrambled to move to an email/password based account creation for now. If you are amongst the users who had a problem signing in, we invite you to please update the app from the AppStore and give us another try.

Future signup plans: In retrospect, using the magic link signup approach was a mistake. We should have known better. In the near future, we will include more options for logging in using social accounts, so that the onboarding in the app is even easier (with no need to fill in your name, email, or profile image).

International support: We underestimated the international appeal of HiHello. We got several people asking why it wasn’t available in Germany, India, UK, Australia, Brazil, and more. We decided to go ahead and release the app globally. As you can see from the chart below, more than 50% of our user base is international!

Users quickly alerted us to some bugs with international phone number formatting and SMS delivery. The international phone number formatting bugs have been resolved with the app updates and SMS delivery should now work in all countries that are supported by Twilio. To be clear, when you share via text message the SMS is sent from a HiHello number, and not from your device. We chose to do this as sending the message from your device effectively gives out the mobile phone number to someone that you may not want to share it with.

Unfortunately, for our users in India, SMS based contact exchange will not work due to the limitations in sending SMS messages to Indian mobile devices. We’ll continue to look for better solutions for helping our users in India.

Additional fields: We were pleased to see users asking for more fields on their cards! It shows that people want to customize and personalize their information, and that having different cards for different contexts is something people appreciate and care about. We’ve pushed an update to the AppStore for adding additional fields (Instagram, Snapchat, WhatsApp, and Github) to the iOS app. Apple reviewed and approved the app this morning, and it is now available globally. Support for additional fields on Android will be ready shortly. We’ll continue to add more fields in the future as well.

App stability: We’ve made a few bug fixes on both iOS and Android to make sure the app is more stable and reduce the possibility of crashes.

The feedback from users has been extremely positive. Here are comments from real users of HiHello who emailed us or tweeted us:

Have been looking for something like this for years.

Amazing job though this is a must have app!

I love this idea. Finally someone did it!

Hi — this is a cool app with a great concept.

I saw an article about your app in TechCrunch, and I just downloaded and set it up — seems like a great solution to an age-old problem! I’m looking forward to taking it for a spin in the real world.

And my personal favorite:

I went to YC demo day yesterday and used HiHello quite a bit. When I gave my contact to one investor his eyes lit up and he said: “Wow, this is the best company I’ve seen all day!” He then proceeded to download the app.

Your feedback is what gives us the energy and the motivation to move fast. So please keep it coming. We may not be able to respond to each one, but we assure you that we read every single one and your input helps to change the priority in which we address issues and add features.

In the near future, we’ll make it even easier for you to just text us feedback from within the app. For now, we’d appreciate it if you can email us at support@hihello.me.

We’d love it if you can help spread the word about HiHello. If someone you share your card with likes the experience, we’ve also made it really easy to also share the HiHello app with them via a code. Just click the [Hi] logo in the top left corner of the app to access the Share HiHello code.

If you’ve read this far, I would like to thank you for following our journey and for being a supporter. We would welcome your continued feedback as the app evolves in the coming months. 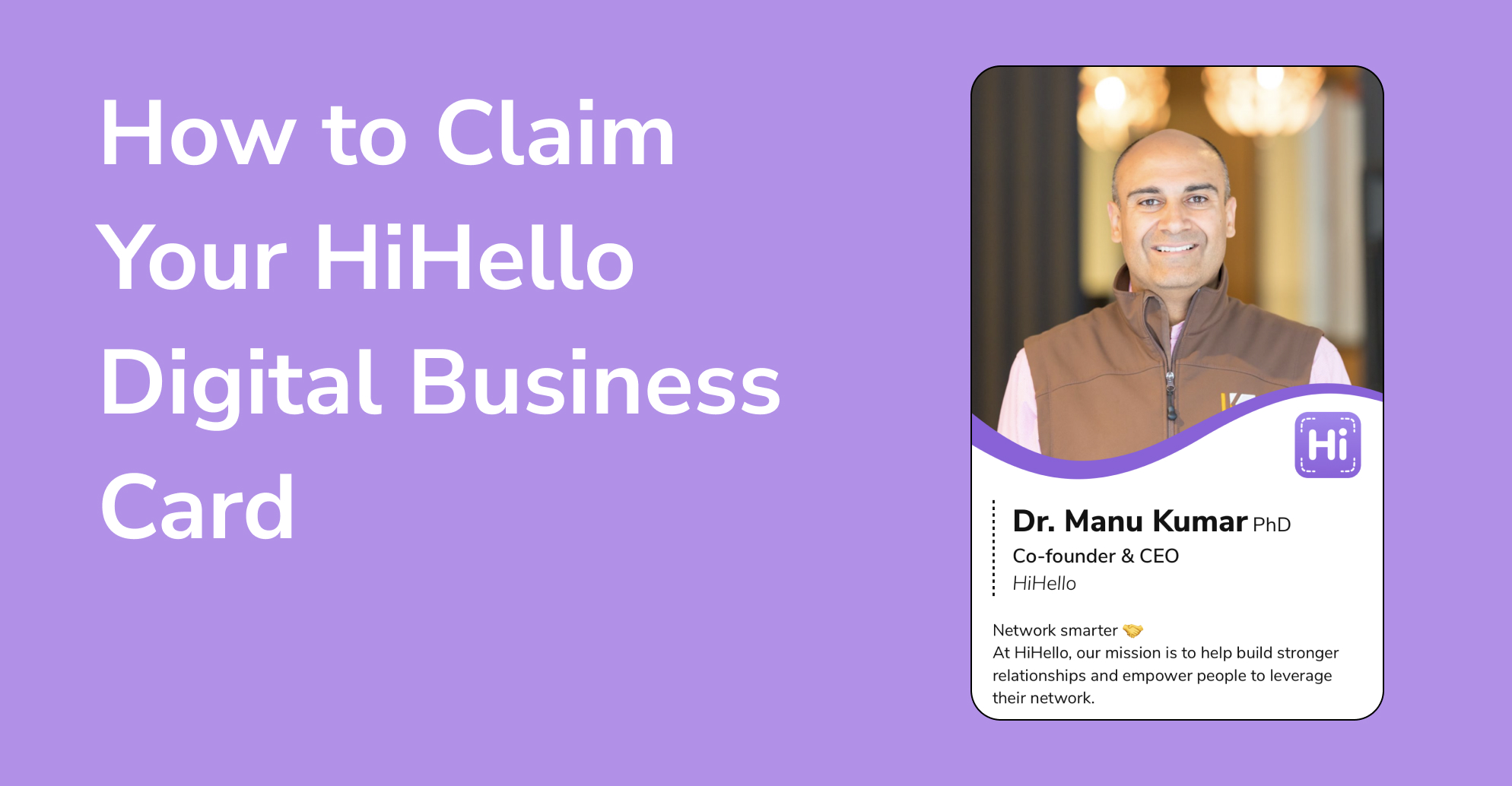 How to Claim Your Card

BY
Mel Chiri
If you or your company signed up for HiHello for Business, follow this guide to learn how to claim and access your new digital business.
December 16, 2020

How to Create an Email Signature

BY
Mel Chiri
Follow this step-by-step guide to learn how to create an email signature that links back to your digital business card.
December 9, 2020 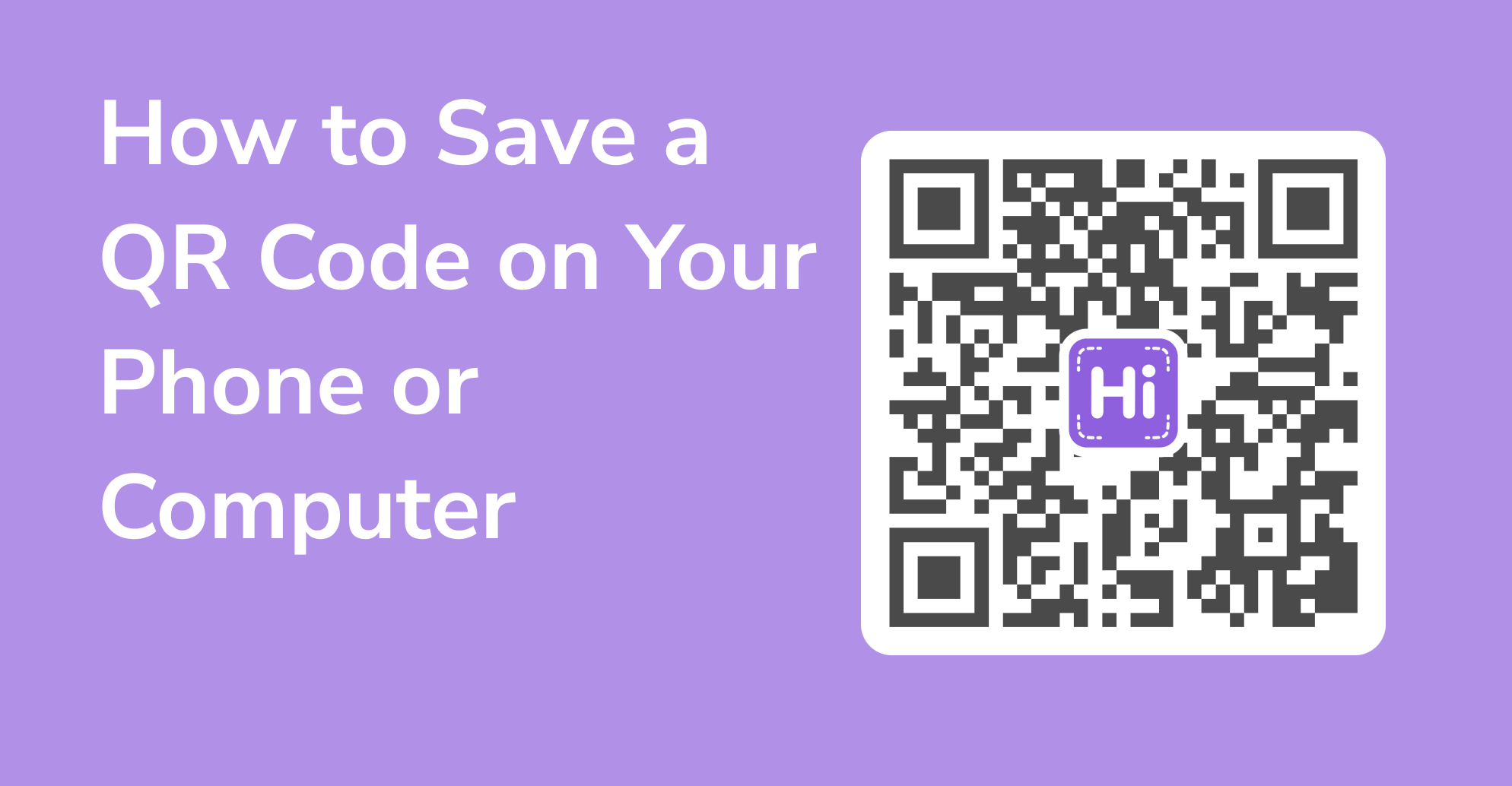 How to Save a QR Code on Your Phone or Computer

BY
Mel Chiri
Follow this step-by-step guide to learn how to save your digital business card’s QR code on your iPhone, Android phone, or your computer for easy sharing.